FOURTH DAY - ROBIN HOOD GATE TO BALHAM (and back to Wandsworth) 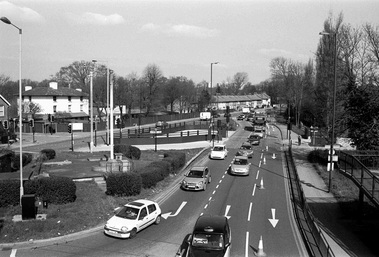 Welcome back to the delights of the never-ending trip around the sumptuous delights of inner London. It has been nearly a week since my last  safari to the darkest areas south of the river, but here I am again. I decided to retrace my steps from the start of Wimbledon Common as I had made such a cock-up the last time I was out. So, here we are on the Footbridge at the Robin Hood Gate Roundabout..
Ω

(Notice the black and white photo - go to 'Cameras, Computers and Software' for info)
Such an innocuous start point. Such a painful trip to get here. Here's a detailed break-down of the journey.

I started off from home and got a bus to Archway. I then got another bus to Gospel Oak Overground Station where I took the train to Williesden Junction. Deep Breath..I then got the overground train towards Clapham Junction, changed at West Brompton and got a tube to Putney Bridge. Finally I got another bus to Robin Hood Gate. Took me nearly 2 and a half hours! Silly thing is - for reasons that will become obvious later on - I spent more time traveling than actually walking!
Here are some shots of my journey that I took along the way.

Gospel Oak and West Brompton Stations
Another digression. I'm sure you've already noticed I'm a little strange. I do, however, have a even darker secret. I'm a train enthusiast. I mean I'm not a train spotter anymore - I grew out of that when I was about um...40 - but I still get excited about trains whether they be real or even models.

This can be socially difficult. If you are at a party and you mention that you're - say - a mass-murderer, people will reply.

"Oh, how interesting! Perhaps I might know someone you've murdered?"

Whereas if you say you've been to a Model Railway Exhibition - here's a goodie - their expressions will immediately darken and they will begin to edge away from you.

After the deluge's of the previous week, the sun was shining. The light was very good for photties plus I wanted to compensate for the lack - apart from the bedraggled stuffed rabbit - of images from the previous Friday afternoon. So you'll be happy to know that this section will be inundated with spectacular shots of well..everyfing.. 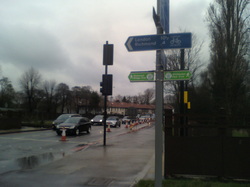 Where were we? Oh Yea, Robin Hood Gate. Now the rain has gone - this photo was taken with me mobile on the previous Friday - let's see if we can go the right way this time.
Ω 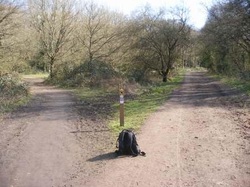 Here is where I went wrong. Take the left turn immediately after leaving the playing fields and don't go straight on, as I did 5 days before. Easy enough mistake to make, especially if you've started day-dreaming. One of my faults I guess. I keep drifting off into my own little world. I just find the real one so unsatisfactory...See I'm off on another tangent already. We've haven't even got to our first pretty site of the day.

So climb up the hill and we arrive at Queen's Mere.

The video is worth inserting because of the bird sounds. You can even pick out a woodpecker about half way through.
Shame it's so shaky. I obviously hadn't recovered from my journey down to here. No! I didn't have the 'DTs' - that won't happen till the next day.

Once you've fully appreciated this splendiferous vista, carry on up the hill and you will come to the quaint Windmill Museum at Putney Vale. If you ignore the car park, the crowds, the dogs and the incessant announcements for food orders from the local cafe, it's a very pleasant site. Here are a couple of photties.

You carry straight on back into the wood and you soon arrive at a busy road. Cross it at one of the pelican crossings and you'll find yourself in the hallowed area of Wimbledon. Ω


This is not the Wimbledon of the Tower blocks and the 'chavy' shopping centre. No, this is the world-famous Tennis, 'Pims and Strawberries' Wimbledon. For two weeks every July the world of tennis descends on this tiny area.  The Stadia and courts are all hidden away behind some very swanky Housing and since the Capital Ring doesn't even go past the entrance you might even miss it. As the map shows you proceed down Bathgate road to Wimbledon Park.

The Top and bottom of Bathgate Road - very nice. 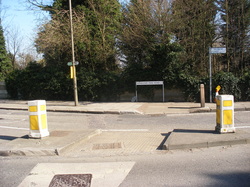 If you are very lucky you might spot some shifty looking gentlemen, usually smoking fags, hovering round some of the shadowy corners. These would be the paparazzi. Some of the more successful tennis players own accommodation around here and visit out of season to get away from the prying eyes of the press. Fat chance.
I've never been around this area during Wimbledon fortnight - I'm not even sure I'd be let in - but I shudder to think what it is like in July, I'm not a big fan of the whole celebrity culture. Fortunately, we're still in March and the Capital Ring turns left to go into Wimbledon Park.

We now enter Wimbledon Park or rather half of it. Check out this Map. Ω

Did you notice how the Path seems to have been squashed into the left hand side of the common? That's because three quarters of the Park has been fenced off. 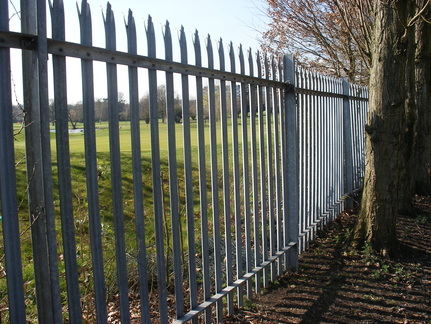 No Riff Raff!
It's jolly pretty on the other side; a beautifully landscaped Golf course is complemented by a large lake. I guess it is all linked with the "All England Lawn Tennis and Croquet Club" On our side 'we' have some squashed-up playing fields, a boating house, children's playgrounds and some toilet's. In fact I even risked doing a very swift and jerky - battery running out - pan of this paradise from the wrong side of the lake. What soundtrack do you think would be appropriate?

There are lots of areas where the have and have-nots brush shoulders, but I always think that Wimbledon Park is the most extreme example in the whole of London. I did take a few piccies around the plebs section as the light was so good today. Mind you, I had to be a bit careful as the kids and the mothers were out in force this morning. A solitary male taking pictures sends out the wrong signals these days.  Here are a couple nevertheless:
So with suspicious parents burning holes in my back, I decided to move on. Interestingly after all this idyllic scenery we now climb up and pass through the most urbanised section of the whole route. Ω

As you can see from the map, this is not a photogenic section. There is a small park, but it's next to a primary school,  so the cameras have to left hidden away - for obvious reasons. Then it's a trundle through Earlsfield,  then along the road and up the hill with the Cemetery to your left. Finally turn left and then right just by Wandsworth prison,  pass along the County Arms - a lot swankier than when I used to drink there - and onto the Common.

It was about now that I started to take pictures again. So here's one of the prison and a few I took of the small lake - well pond more like. They look remarkably rural. This is very deceptive. The main London to Brighton line - I've also included a black and white one of Wandsworth Common station - is only about 20 yards away to the left of the path from which I took the photos.

You're knicked, son..
After you've crossed the railway line you head for Balham - "Gateway to the South!!" (Never mind. It's an old joke) and then into Tooting Bec Common. As I mentioned before, I do have some friends around here, so I decided to give them a call to see if they were around. "Come directly to the Pub!" I was ordered. So I legged it back to Balham Station, took the next train to Clapham Junction and then a bus back to the Brewer's Arms in Wandsworth. Ω

That was the end of day 4. and tomorrow is another day