At last..the final day.
When I started writing this thing not too long after I had physically completed the walk - Saturday the 2nd of April - I never thought I'd still be doing it 4 months later. Actually that's a lie, it just sounds like the sort of thing I should say.
When I was in my last period of employment and expressed my disgust with the job to the manager above me. In his typical bloody-minded pragmatism, he replied. "At, your age you'll never get another job. I mean your past career doesn't have much to show for it, does it?"
... And in his blinkered view on life I guess he was right. That is why I spent 3 years biting my tongue in that job.  Eventually, as I got more and more stressed out and I started to fear for me health - blood pressure is still bubbling - I took this "path of no return".
This tale of my walk around the Capital Ring ain't gonna pay the bills (my bank account is 'quicksanding' into debt), and, apart from my walking partner, I'm not sure anyone will ever look at it. But..at least I've dun it and got more satisfaction out of it than my last 3 years of employment.

Enough of the speeches... Let us return to Hackney Wick 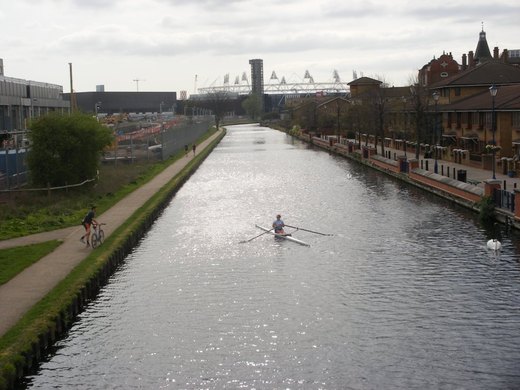 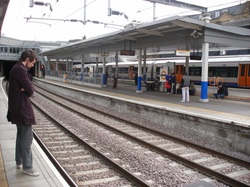 Know the feeling mate.. Waiting for the train to Hackney Wick.

We left pretty early on the Saturday. Bus, then train on the Overground from Highbury and Islington to our starting off point. So, as you can see from the photo above of the river Lea Navigation canal , there was just us, a cyclist, a canoeist and a swan. Ω

When you get off at Hackney Wick Station, it's best if you head for the bridge at Eastway. You need to be on the east side of the river extension to follow the CR along the Lea Valley Walk. At the moment there is an amazing community amphitheatre built from wooden bricks that lies directly under the A12 dual carriageway - unfortunately only running for a few weeks in July and August of 2011. It is part of a fascinating artistic community that has grown up around the abandoned warehouses in the area. They've moved from the now trendy and too expensive areas such as Hoxton. They have, incidentally, nothing to do with the Olympics. There are a couple of festivals: there is the Hackney Wick Festival (the official one) in September and the more um..bohemian Hackney Wicked in late July. I'm off to the latter this weekend. So there maybe some more piccies coming soon.
Next, head on back up the Lea Valley Walk. We will be following this for quite a while. Notice the famous Hackney Marsh recreation grounds on your right. The home of a seemingly infinite number of  footie pitches. Every Sunday morning during the season they still resound to a rhapsody of colourful metaphors. I have to link you to this.

I know someone in our choir who lives round here - hence my knowledge of some of the community activities. He took me around the marshes and pointed out that, because of the Olympics, a lot of money had been given to the councils to landscape and renovate paths and benches around this area. Well, at least someone in the public domain has benefited from the circus coming to town, but I think they should make the most of it, because when it moves on they ain't gonna see much more.
Oh dear, politics creeping in again. Here are some piccies to compensate.

One of the most impressive developments in this area has to be the Waterworks Nature Reserve. Originally part of the Water filtering works from the river Lea, dating back to the late 18th century - yes that old - it has been turned into a very pleasant Nature Reserve that spreads out eastwards. If you fancy a break, this is another recommendation.  Ω 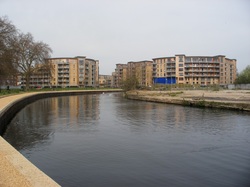 With Clapton on our left, you cross over a footbridge and continue until you come to The Princess of Wales pub. It was a bit early in the morning for a pint, but from looking at some of the reviews, this was probably not a bad thing. We have to cross the frantic Lea Bridge road as the way is blocked, careful now. Once over the road, carry on down the east side. You'll come to some new flats (see left) - looks almost like Venice, dunnit? Ω
Crossing over the footbridge, we are now faced with Wathamstow Marshes. It's a very open area, only really broken up by the two railway lines that run across it. I'm sure you're getting pretty bored, so how about another jolt of railway porn? You know you can't resist.
Bloody woman - got no respect. 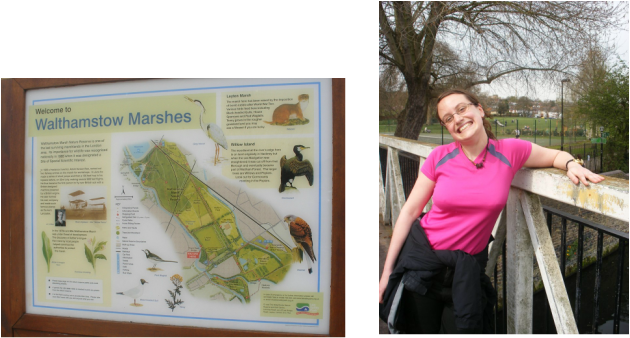 I would love to say that I spotted lots rare and fascinating birds in the marshes. Only this one..

If you continue along the Lea Valley Walk you'll come to a boatyard and marina, followed by some large reservoirs - the river Lea is still involved in supplying large amounts of our drinking water to London. However, we've reached the eastern boundary of the Capital Ring, so now it is time to head westwards over the footbridge and into Springfield Park. Ω
Springfield Park is a splendid and very picturesque park that overlooks the Walthamstow Marshes.  No matter what time of the year it always looks very pretty. As the early blooms were coming out - and don't forget we had a very warm Spring in 2011 - I took a few photos.
It has a great cafe that used to be a private house before it became part of the park at the beginning of the 20th century. We would have stopped for tea and cakes but it was lunchtime and there are a number of good pubs coming up. So naturally we moved on.

Coming out of the park we're on the final stretch now. Welcome to Stoke Newington, an interesting part of the borough of Hackney: historically it has always been a refuge for persecuted communities and as a result  is a very mulitcultural area. It's got a little gentrified and trendy over the last few years but it has not quite gone the same way as Islington, thank goodness. Ω
Follow the signs and just carry on heading west until you hit the A10. Hopefully you'll hit the road near Abney Park Cemetery.  This is one of the most intriguing cemeteries in London and is well worth the detour. Here is one piccie from this walk and another from 2007 when it was a little brighter.

..and here are a mixed bunch taken in the cemetery. 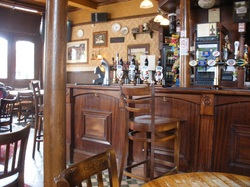 Here's the pub. It's the Daniel Dafoe. A quiet, unpretentious place, good pint of Bombardier and food looked quite appetising. I'm sure I (we) would like to have had another beer, but Kate wanted to visit Harringey a little further along the way. No contest then.

So carry on down the High Street and turn right at Stoke Newington Church Street and follow the signs towards Clissold Park. As the link shows the park dates back to to the 1890's. It's a very welcoming  family orientated park; there are no fences (Wimbledon Park, remember?) baring people from large parts of it. Personally I've got a bit of history with the park. I always remember coming here to a fun fair way back when I first arrived in London in the early 80's and over the years I've always known people from around the area. Strange that. Ah yes, I remember those days well..when I was half the man I am today. Unfortunately I'm talking literally. I've an old photo of meslef (that I can't find!) taken here. I don't even recognise that thin apparition in front of me. Ho hum..the pleasures of growing older.

Today there is a lot of renovation work going on around Clissold House, so it is not at it's best. Here are a few shots.

Once you've strolled through Clissold Park, you come out into Green Lanes (A105). Head north until you come to another bizarre Water Pumping Station (remember the one way back in Streatham?). 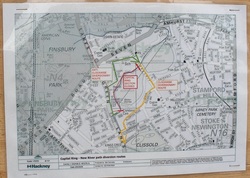 Normally, you turn right here and proceed along a very pleasant watery path that follows the 2 reservoirs. Unfortunately - as you can see from the sign -  the way is closed. I suppose we could have taken the diversions but since Kate wanted to buy some Baclava from one of the Turkish shops in Harringey we decided to carry straight on down Green Lanes.
The reservoirs are both a marine activity centre and a wild life reserve. They were also the location for an episode of 'Primeval' in which a giant dinosaur aquatic thingie was eating up all the sailing dinghies. So I guess it was a good thing it was closed off. Ω

After our brief excursion down to the shops, we then turned back into Finsbury Park. As the link states, this is a nice family park with loads of facilities and an interesting history regarding music gigs. Personally I guess the most bonkers thing I've done here is to sing with other members of the choir. Once a year in August we come to Park and well..just sing. One year it was raining so hard we took cover under the exhibition roof, but we still came. So if you are wandering through the Park one balmy summer evening and spot a load of nutters filling the air with splendiferous music, you know what it is. Ω

As I type this it is now Tuesday afternoon on the 26th of July. So, what's that?5 months since I started creating this Web Blog..and it's now the last bit.

Journey's end
Ω
Between Finsbury Park there is a disused railway line that will take us all the way back to Highgate Woods.It used to connect the East Coast line with East Finchley and beyond (what is now the Northern line). Now it is a very amenable walk that slowly ascends to the conclusion of our journey. Here's a few photos and a link to the history of the Parkland Walk. Oh bloody hell, I've got loads of photos of this path that I've walked and cycled up more times than I can remember. But I can't find the place where I've put them in me files!!! These will have to do for now.
Ω

Well, That's all folks....
Not quite. You know I had a scary dream last night. I dreamt I was so depressed that I wanted to run away from everything. And then I woke up...and I was still depressed! Oh well, I guess I'm just being human. The constant job applications, the odd interview - I even went on one last week that gave us a spelling test. All for nothing you feel.
I hope you've enjoyed this little effort. You may want to go out and do the Capital Ring Site yourself. Apart from the many other CR Web sites - listed at various locations - there is an excellent book you can buy.

Today is the 2nd of August 2011 and I'm stopping now.  I wont add any more to it now I've finished. Just to say, I think I had better continue these little things. One will be about my attempts to loose weight called - logically - 'FAT BASTARD', and the other one - based on my cycling experiences - will be called 'COFFINS on WHEELS'. Hope you to see you there. 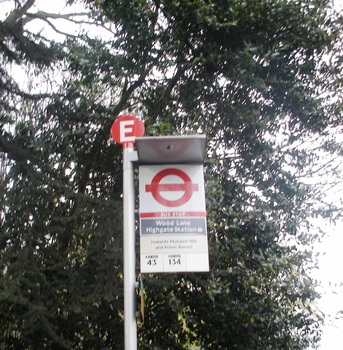