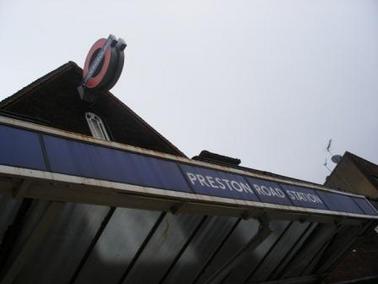 In contrast to the blue skies and sunshine of Monday, today was overcast and gloomy. Very much like my moods at the moment. Today should be an interesting walk - savouring the delights of North West suburban London, with a brief ascension - literally - into one of the Empire's (sorry, British) educational establishments.

So it's out of the Tube station and turn left into the back streets. Even though I had a fully illustrated London Capital Ring Guide, this was the first (and not the last) time I got lost. If you've lived in London for any length of time, it doesn't take long for you to realise that this is not one big city, but a series of little towns all joined together. So, when you step out of your own little bit of turf, you might as well be in a place 1000 miles away. Taking the 2nd, rather than the 3rd, turning I ended up walking down a street when all the Capital Ring signs suddenly vanished 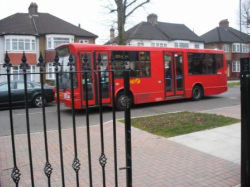 Ah, look here. It's a local bus. Actually I'm only just off the path; turning round will take me into a Preston Park and back onto the path. Ω
I heard an interesting story about Colindale – just north of here. A friend had been sent to a reference library there in order to do some research. At lunchtime, he asked the people working at the library where he could go to get something to eat. They looked at him with totally blank faces. “Well, there’s Nothing”.

I guess that sums it up, I wonder what these people do amongst these huge empty estates. Watch and get excited about ‘Britain’s Got Talent’, or maybe create self-indulgent web-sites. Who knows?

Off course it was inevitable that I would get a job here. If you want to read about my adventures at Utility Warehouse in this barren land then go to my Bobness Slims site; just click here.

Enough of the patronising observations, lets move on to South Kenton and Northwick Park. 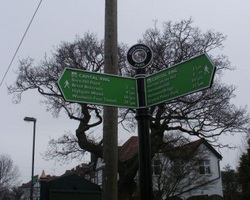 We now pass through an area that many of you will be familiar with - for about 10 seconds. It's about 15 minutes out of Euston on the old London Midland Line; just before you start becoming bored with staring out of the window. If  you look to the west, you might notice a large park with Harrow-on-the-Hill rising up in the background.

...and here are some gripping shots of South Kenton Station.  Bet you wished you'd leapt off your train and investigated. There is a pub right next to the Station called The Windermere but I forgot to take a picture of it as it didn't exactly leap out at me as a cultural highlight. However, if you read the 'beer-in-the-evening' review (click on the hyperlink), I may have missed something.

One side of the Subway...and out the other.
Northwick Park has a little history for me. I think I may have played Sunday cricket here a couple of times in the nineties; I end today's walk at our 'home' ground at Boston Manor. Oh - by the way, maybe it's a sign of getting old but I've picked up that lazy retrospective habit where you try and pigeon-hole your life into large chunks of time.

So I can say that the eighties were my rock n’roll years, the nineties were my cricketing years and the noughties were mostly crap. As for the 'oneties'..let's not talk about that.

Anyway, back to the walk - here's a little montage of shots from around the area, including Northwick Park, with the large Research Hospital in the background and - forelock being constantly pulled - the approaches to Harrow School. Ω 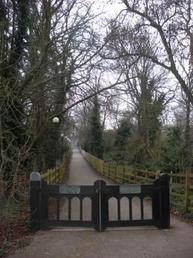 Let's climb up the hill to one of the UK's famous centres of excellence, Harrow School. Bloody hell - I've just clicked on the hyperlink - this is an impressive Web Site.

Isn't that a lovely picture of the boys? I have to admit - it being a wet, wintry, Wednesday lunchtime  - I didn't actually see many Straw Boaters. And did you check out the fees? Course you did! Only £30,000 a year..Bargain! If I had a kid - which as you know I ain't - I'd sign them up right away.

Can you imagine how he would benefit from being educated in such an environment? Surrounded by future leaders of the country, captains of industry, financial geniuses, sons of genocidal African leaders, Middle Eastern playboys who become Fanatical Muslim extremists…I think I had better get down the Hill quickly..

Seriously, Harrow is a pretty anonymous North Western suburb but this area rises up like it is from another planet. What with its Historical Architecture and Shops like these...

That's a bummer, I was going to cheat here and shove some pictures I had taken on earlier visits, but I can't find them on me database. Hah, call yourself an IT technician?

So it's back down the hill as we head for the salubrious delights of Sudbury. Watch out for the pathway here, as it is pretty hidden away from the main road. Ω 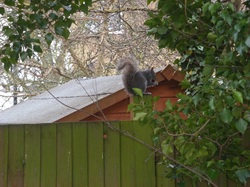 The path then takes you down through a little greenery to Sudbury Town. There are a few shops, a Tube and  Railway Station and if you turn left there is The Grove Farm Nature Reserve. Unfortunately we turn right, so the only photo I took was of this 'Furry Rat', a Sudbury Squirrel. Ω

After passing through some more Estates we come into one those areas on the Capital Ring route that have been left undeveloped. It's centred around 'Horsenden Hill'  Ω

The Ballot Box Pub (looks much nicer on the Website) has an interesting history. It used to be in a now abandoned village on the other side of the hill - I'll come back to it in a minute.

Meanwhile let's climb up through some of the original Woodland. On a clear day you get some nice panoramic views of North-West London, but it was pretty miserable up there, so rather than subject you to some dull and misty photties of the top we shall descend into Greenford. Ω

Actually, I had a rather um..  intriguing experience while I was walking this stretch. At the top I saw a couple of shell- suited men with no dogs who were wandering around looking a little shifty.  I’m not really into this sort of thing, so I rapidly proceeded down the Hill. I then saw a few cars pulling into a lane near the top which was a no through road. Finally, I met a young lady (god, I’m sounding pompous) who was rather over-dressed in full make-up and high heels and was pottering down the road. Strange, as the hill is a couple of miles from any residential areas. I wonder what was going on?  You’re certainly not going to find anything about this on any Web site. Well apart from this one obviously.

The most interesting result of this was I got slightly off the designated route and came across Brabsen Green Hamlet. Remember I told you, that the Ballot Box Pub used to be on this side of the hill? It was actually in this village. Check out its history by clicking on this large resolution photo I took of the Brabsen Green Hamlet Sign.

The Pub was moved to its present location in 1943 and the last building was demolished as late as 1972. Not that you'd know as you can see from the photos. Interesting, how quickly nature re-establishes its hold. Ω 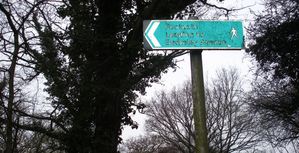 Back to the Capital Ring. I didn't follow the path but took a short cut directly down to the 'Grand Union Canal'. Ω

The canal is an interesting walk in itself. It ends up coming into the Thames at Limehouse and passes through areas such as Paddington, Regents Park and Camden. Here's a link..that shows you the full route from Birmingham no less. When I did this walk a few years back, I started out at Hayes and Harlington, but light-weights can start it far more centrally. Notice the Union Canal web site is a little more um..conventional than the one I've created. 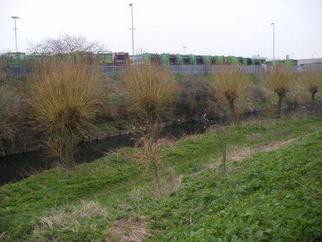 The path then zig-zags its way across the Perivale Park Sports Ground past the municipal Golf Course and we now come onto a stretch that follows the River Brent Valley onto a branch of the Union Canal . Ω
About the most exciting thing about this section is the recycling depot on the opposite side. Here the Brent Dustbin Lorries go to sleep.

Definitely another photo for the Constable treatment.

I know it was raining and miserable the day I walked this section but I do think I've been a little cynical in my descriptions, so here's a bit that I actually find quite enchanting. Ω
By this time, the rain had really set in and it was starting to get dark; the few piccies I tried to take had all come out badly so, to use a Blue Peter euphemism, here are a few I took earlier - April 2007 to be precise. If you check the map you'll see that the Viaduct is cut off from the path by a small wood. Although you can hear the trains (it is the London -Bristol line) and the bloody Uxbridge Road thundering in the background you can't see them. As a result this small area of parkland feels strangely isolated.
But don't take my word for it. Here is another of my juddering pans around the area. I've dubbed a short piece of music to it - far more attractive than my lugubrious commentary. The piece is song by the amateur choir, Songlines. I've been in this choir for a few years now, and I must admit it has given me some of the most pleasurable experiences of the last few years.

Not really. Singing was okay, but I don't think I came close to capturing the atmosphere around this little piece of greenery. You'll have to experience it for yourself and while you are at there, have a look at Wharncliffe Viaduct. Originally built over 150 years ago, like all of Brunel's constructions, it's a very imposing site. The graffiti almost seem to enhance it.
Nearing the end of route today. Normally you don't have to cross the busy Uxbridge Road, but during the watery season the path under the bridge is often flooded. So it's about 100 yards left down the road to the traffic lights and back again. Following the path you then come out at Hanwell Lock on the branch of the Union Canal that comes into the Thames at Brentford. Ω

By this time - as they say up north - it were getting pretty grim. My cheap little digital camera was struggling with its shutter speeds and the pictures I took of the locks, the swans, the ducks and even the delightful M4 motorway all came out blurry and dull - check out the ones below.

I came off the path at Boston Manor. the home ground of my Sunday afternoon cricketing triumphs... one fifty in six years of trying. Wot did you expect? Kevin fucking Petersen?
See you on Friday.

The Grand Union Branch, a Pub and my escape route for the day.