THE SEVENTH DAY - The Lord rested..and I continued from GROVE PARK to WOOLWICH

This is a great shame. Today's section is quite a long one by my standards and travels through a lot of attractive rural areas. I suggest - if you haven't done this already - you check out some of the other Capital Ring Sites (Here's one, and here's another) . They've got far better equipment than myself (Oooeer!!) and experienced far better weather conditions, so their photties are much better. That's my excuse anyway.
Except for the final trudge into Woolwich, the longest stretch of streets comes right at the beginning; so let's get that over with shall we? 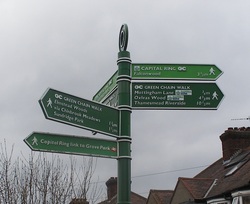 This is not quite as daunting a sign as it first appears. We've just come from the Capital Ring Spur to the station. So now we is on the Capital Ring proper again and heading towards Falconwood. Follow the sign and you pass by some incredibly swanky houses and come into the Sports Fields of Mottingham. Oh dear, check out the grey skies. For example, the poor subject below, bolted just after I had taken this picture. It had got so dark the automatic flash went off to compensate for the poor light. You can see the startled look on his/her face. Sorry Horsey!

While the sign points the way to the fascinating 'King John's Walk', I’ll have a trawl around the Web to see if I can find anything about the origins of this section. There are a few (better) photos, but the most intriguing thing I can find is an 'audio boo' from darryl1974. Kinda cute.
I guess, therefore I'm left with my own contributions. This section of farmland allows panoramic views of both the City (Gherkin) and Canary Wharf, so providing a nice contrast with the green area you're walking through. But my piccies are oh so dull.

See what I mean. Mind you, I did take a picture of a heavily graffitised and damaged metal sign about the area  - looks like the little bastards have attacked it with a sledgehammer.  So if you click on this, you can zoom out and decipher it.

Then it's on to Eltham Palace.


Unfortunately at this point the weather did move in and it began to rain very steadily. So waterproof underpants on, with the rest of my other clothing I hasten to add, I set off again through some more swanky housing.  According to the Green Chain sign we also pass along the fringes of the 'Royal' Blackheath Golf Course. I only mention this because the sign has a rather eccentric portrayal of royalty. What do you think?

Follow the path through the various parks and head across the thunderous noise of the A2 and the London-Dover railway line. You double back on yourself a little way before heading up the hill and into the old forest known as Oxleas Wood. Ω

Due to the ancient history of this forest, I'd love to say I came across some hobbits and elves, but I'm afraid I only met a few hardy dog walkers. 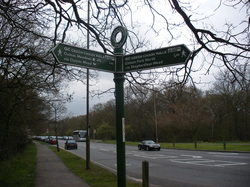 Despite the many paths that meander through the old wood, the Capital Ring is well signposted. Your woody idyl is broken however, as you need to cross the old Rochester Road, which even on a wet miserable Wednesday morning was very busy. It's not the easiest thing to cross, but once you've succeeded you enter a long stretch that takes you into Oxleas Meadows and onto Eltham Common with some pleasant sights along the way.

Ω
Walking into some more of the old wood, you come out below a fascinating old Tower called intriguingly Sevendroog Castle. I do recommend you click on my hyperlink. The tower has a fascinating history. It's not in the best state of repair at the moment and I certainly didn't see it at its best. However, it has finally been give some money towards its restoration. I'll probably visit it again when the weather is better. In the meantime, here are some dull piccies - even the old fall back of the pigeon in an amusing place  failed to enliven my shots. 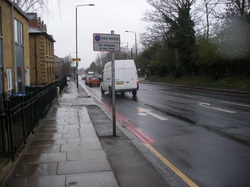 A lot of the Green Chain paths offer enticing routes towards South-East Kent, but it's now time to head norf to the bright lights of Woolwich. You now come out of the woods and onto the busy Shooters Hill Road. Head down to the junction with the Royal Academy Road and follow it till you come to a path leading to Woolwich Common. You can sample the culinary delights of the bus stop where I stopped to munch on some sandwiches I'd brought with me. Although I wouldn't recommend it - unless you are into buses. 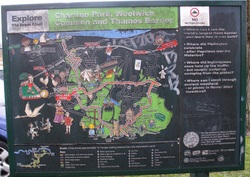 Here is where we going now. You can click on this one to see an enlarged version of the sign. Most of the route takes us through common land surrounded by not particularly salubrious estates and a couple of large NHS hospitals - the swanky houses of Mottingham seem a long, long way away. 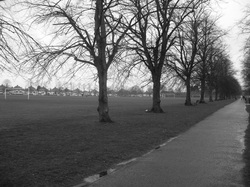 I'll stick in one of me arty-farty black-and-whites that I took in Charlton Park. At the end of the Park is the wonderful Jacobian building, Charlton House. I didn't take any pictures that do justice to it, so try one of the other Capital Ring bloggers..
It is quite hilly around here and as you head down towards the Thames you come through a fascinating valley, Maryon Park and Maryon Wilson Park. Used by the Romans as a fort and a compass point for ships in the 19th century who were coming down the Thames, it was part of the forest where highway men used to hide out after committing robberies. Here are some photos of the area. Ω

In Maryon Wilson Park there is a sweet little animal Park where you can take the kids to feed the animals, that is for the kids to give food to the animals, not to, umm.. feed the animals with the kids. Mind you...
Returning to the park, at the bottom are some rather bedraggled tennis courts - a world away from Wimbledon. However, anyone familiar with that great film of the swinging sixties, Blow-Up, will recognise them as the ones where some crazy students are playing tennis without any rackets or balls - told you they were...students. Scary thing is that even though the film was made way back in 1966, the courts have changed so little you can still imagine the very handsome David Hemmings looking on bemusedly.

Coming out of the Park you are immediately confronted by the dual-carriageway of the A206. Unfortunately if things were perfect, you would just cross the road and head straight down to the Thames. Life is never perfect (6 months and counting since I last had a job..ooops I digress), so you'll have to turn right and follow the road for about half a mile before you return to the river. This is doubly frustrating as directly south is the Thames Barrier. Apart from it being a very impressive piece of engineering, it tops and tails beautifully with Twickenham Lock. Oh well, here's a link to the Barrier, to see what we missed.

In the meantime, I crossed the road at the junction. I checked out the signs, but not before I was approached by a local who asked if I was lost. Don't worry folks, despite the bollocks you read in the tabloids, most people are not going to mug you in broad daylight.  They are just being helpful. So I thanked the guy and walked on. Eventually you come to roundabout where you take the left turn and finally head towards the river. It's a lot wider than when you last saw it, but not the most inspiring of settings.  Ω

Looking east towards Canary Wharf (you can just pick out the Thames Barrier) and west towards Woolwich and beyond. One of these photties is in black and white, but its' so drab you can't hardly tell the difference!
Nearing the end of today's walk now, so it's time to head towards the train station. It's easier to carry along the riverside rather than try to cut the corner off, as I did. This is due to the busy dual-carriageway and the hills; you end up doubling back on yourself and climbing up the hill and back down again - like the Grand old Duke of York. So just follow the signs through the new Estate to the Ferry road - you can't miss it - and then follow the signs to Woolwich Arsenal station. Ω 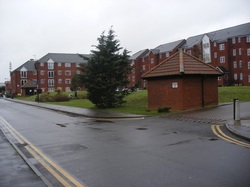 I was pretty wet, miserable and tired by this point. I guess this inspiring picture of the new estate along the Thames summed up my mood. So I took a train back to London Bridge and then the misery line back home.

See you on Friday