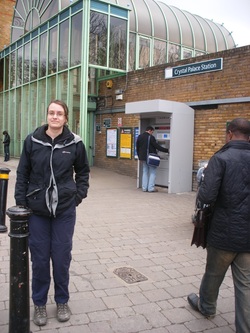 Welcome back! It was a Monday 28th March (to be precise 9:36 in the morning) when I had recovered sufficiently to begin another section of the Capital Ring. As you remember, I had given up at Crystal Palace on the previous Thursday. So here we are back at the station.

Thanks to the wonders of the new Overground Network, we were able to start at quite an early time. What was that? We? Ah yes, I forgot to mention I have a walking partner today - that's her on the left of the photo - not looking too impressed (her standard expression by the way). If you want to know anything more about her, well tough. You ain't gonna get it - not on this blog anyway.  Ω

Time to move on. As the map shows you have a choice of two paths around the park, a nice circular tour, or past the athletics track and onto the Dinosaur Lake. Guess which way we are going? Yea, let's head for the dinosaurs!  I always get excited when I visit this bit. I think it may have been an old Blue Peter programme from the sixties - along with the maze at Hampton Court - as one of the places in the world that really sparked my imagination as a child. Of course when you grow up and actually visit the place, it's always a bit of a let-down. Nevertheless, the Victorian dinosaurs here - especially now they have been renovated - have a lot of charm about them and I still get that brief burst of excitement long buried under layers of mature cynicism. Which is nice. So have a look at these photties and here is a link to some information about their historical context and origin. 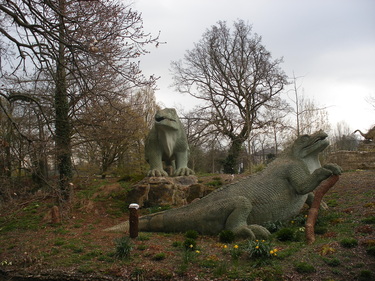 They should growl. That would scare the kids.
No growling, but here's my favourite piece by Songlines.  Only the ladies this time, who do a great version of this song.  I just hope no eagle-eared (?) Todd Rundgren copyright people are listening. 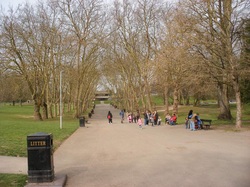 It's now time to return to the 21st Century, worst luck, and head out from the park into deepest Penge. Here's a picture of an impressive pathway that you would have followed if you took the circuitous route. Lots of Mothers with the kids and pushchairs, probably plotting world domination no doubt. I can take some piccies today as I'm with Kate... but not too closely. Ω 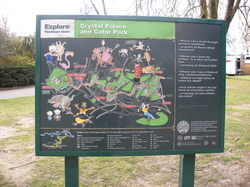 Here's an interesting sign. In this part of London there are a number of other paths that make up ‘The Green Chain’. It can get a little confusing as some signs will have both Capital Ring and Green Chain signs while others will just indicate the Green Chain route. Have a look at the ‘Green Chain’ Web site, it will be very helpful. Mind you looking at the photos on the Green Chain site, you obviously have to be a fit young new-ager or surfer dude to qualify. Since I don’t fit into either category, I better not hang around too long looking at their web pages.

As can be seen from the sign and the map, this section is a mix of residential streets, small parks and school sports grounds. We don't hit the wide open spaces of Beckenham Place park for a few miles.  Still, we do walk past an interesting post box. 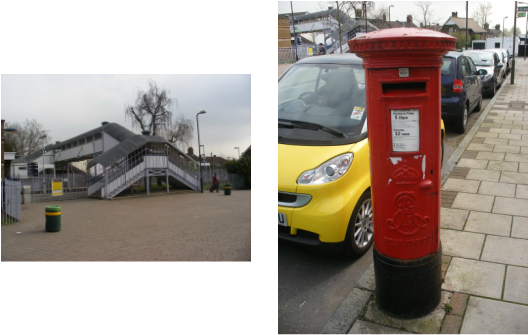 The 'thrilling' footbridge and NOT the Edward VII postbox.

It seems that there were a tiny number of Post Boxes made during the short reign of Edward VIII - remember the m-m-m-movie 'The King's Speech'?
One of them still survives in Beckenham... and this isn't it. It seems I took a picture of the wrong one! The correct box is actually to be found just round the corner at  the junction of Southend Road and Brackley Road. Oh well, It's a great story. And the next best thing I could think of to write about in this section was a slightly interesting footbridge over the railway at Penge East Station. Yea..exactly.
On these walks one of the more bewildering discoveries you make is how much easier it is to get lost wandering along the residential streets than it is in the rural parts. Even with the company of my walking buddy we managed to turn left at a road instead of right.   Ω 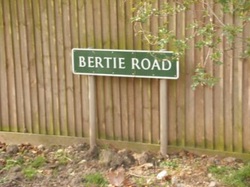 So, after walking along an alleyway that runs parallel to a sports field, we came out into a road and couldn't find a sign telling us where to go next. So we took the wrong option. After about half a mile and no more signs sighted,  we realised we had gone wrong and did a 360 degree turn. An interesting off-shoot from this diversion was passing down this road.
'Bertie' (along with 'Rob', 'Bob', 'Robert', 'Robbie' and - naturally - 'Bobness')  is one of a number of nom-de-plumes that I am known by. I guess it’s an indication that I have no real identity, if you wanna be deep.  Alternatively it could just be that Robert is one of  the most variable Christian names in the English language. Myself, I prefer to be deep. 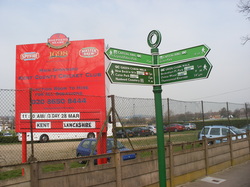 After that brief detour, we got back onto the right track when we discovered the Capital Ring (Green Chain) sign that we had initially missed. So it's left instead of right and then follow some streets, pass through a pretty little park - I didn't take any piccies here - and you'll come to a sports ground.  They must have been playing the first cricket match of the 2011 season. Just shows what a mild spring we had.

Finally, turn right at this sign and follow a muddy road up to the main road - the A2015. Follow the road about a quarter of a mile. Don't take the first road right as this just takes you into an Industrial Estate. A common enough mistake as a local pointed out. It seems this estate is often filled with lost Capital Ringers (stumbling around the area looking like zombies from 'Night of the Living Dead', clutching their guides to their chests).
The path into the Park comes where the estate finishes and some woods begin. And , LO!!, after wandering through a load of suburban streets you enter the rural pleasures of Beckenham Place Park - not forgetting the Golf Course. If you click on the link, you'll see that the course is a public one! Considering its setting this is quite surprising. Almost makes you want to go and have a swing yourself. Here's some piccies. My companion hates walking over golf courses as she is paranoid that the golfers will be aiming specifically for her head whenever they hit the ball. 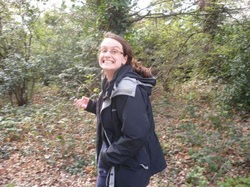 And here is Kate, looking very relived at not being hit by any golf balls.


The next section is a very pleasant wooded area. It can be a little confusing as there are a number of signs for smaller walks, but since we didn't manage to get lost in this section, it must be pretty straightforward.  So follow the grand tour and hopefully you'll come to a railway crossing that takes you the suburban delights of Downham.
Ω


The final Section takes us to Grove Park. Ω.
Again it was through some housing areas. I did try and take a couple of pictures down the streets towards the Thames with the North  of the river (Civilisation!) in the background. Unfortunately it was too hazy to pick up anything, so I won't bother posting a photo.
Crossing the railway next to Hither Green Cemetry you pass a house where the author Edith Nesbit ('The Railway Children') lived. Then it is down Baring Road to Grove Park Station where a train takes us back to London Bridge and the beloved Norvern line.
Sorry today's journey petered out. I advise you check out another Capital Ring Site (he was going the other way) for some great pictures. See you on Wednesday.