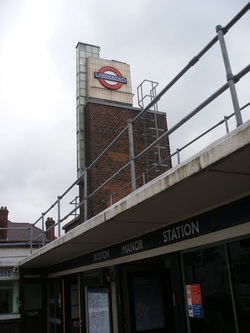 Well It's Friday the 18th of March and it's...raining again. Welcome to Boston Manor Tube.

It would be a slight exaggeration to say that it now takes as long to get to my starting point for the day on public transport as I've walked - 2 buses to Finsbury Park and then a trillion stations on the Piccalilli line -  but it certainly feels that way. The sun was shining when I set out, however the dark clouds had appeared by the time I burst out into the open again around Hammersmith and the rain was well set by Boston Manor.

So, with a distinct sense of ‘déjà vu’, I headed back to the Capital Ring Path. Ω

It's so grim this morning even the road signs seem bright and shiny. There's that lovely 'Harvester' we used to go to for a drink after the cricket. I used to celebrate with the team and their families after  the match. Ah yes...my priceless innings of 10 - on a good week .
While I'm at it, here's a quick reflection on my cricketing days. They were called 'The Marylebone Old Boys Cricket Club'  - nothing to do with the MCC - and began life, I think, as a Pub Team that was based in Marylebone. I played with them most summer Sundays in the mid to late nineties. The ground runs directly beside the M4 with the Piccadilly Line at the end of the pitch and is on the Heathrow flight path. 'Concorde' - it really was 4 times louder than anything else in the sky - would often fly over us as it was landing.  Ω

It was not  a tranquil place.

We used to loose a lot, but like most people I tend to remember the good times - the occasional wicket, the perfectly timed straight drive for 4, even a good catch. No matter how crap you are, you always remember the one time you got it right.

All gone now, the team got old and crocked and no new blood came through.You won't find a single reference to them on Google. That's a shame - another part of life lost in memories.

Time to move on. 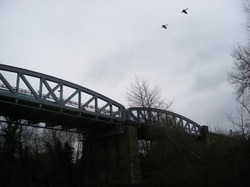 Back onto the Capital Ring, we continue under the M4 and Tube bridges. Weather is again not exactly suited for photography - unless you are into Gothic - but the 2 Canadian Geese strangely add to the composition of this shot. So I'll stick it in. It's my Web site.

Look at the rain tipping down!
We then proceed down the canal and cross over an old iron bridge - 'Gallows Bridge' -  trudge down to the 'Great West Road' (the A4) and pass the delightful 'Smith Kline Beecham' building on the other side. This building even had a patio for its staff members to relax in the sun. But not today.
Click on the map link and you'll see that we pass through a varied - both time and purpose - section. There's the old boat yard where the signs really do take you right into the yard - don't worry you haven't taken a wrong turning. Then it's out into a newly landscaped area full of 'executive centres' and a Holiday Inn. Here's a few photos including Brentford lock and a Canadian Goose.

At this point we have to climb the steps onto the A4 for a little while and head west towards Richmond. We also share the route with the North side of the Thames Path and stay with it until we pass Richmond and head for Richmond Park.

I've done the 'Thames Path'. Yea, me and my walking buddy (who you will be meeting later) started from its beginnings - a pile of rocks at the end of a field near Kemble in Gloucestershire - and walked it in sections in umm..2005 or 2004. Can't quite remember which year it was. Tell you what! You can check the year by looking up when the Doctor Who series was re-started. So it was 2005. That’s how I remember..God that’s sad.

At the moment I am striding forth on a rain -soaked A4 and looking for a safe place to cross the road to get into Syon Park. By the way, watch out for the turning. So enraptured was I by my surroundings that I managed to walk a quarter of a mile past the turn-off before I realised my mistake.
Syon Park is the site of 2 'Battles of Brentford' one took place way back in 1016 and the other during the English Civil War. You can find out about it on this rather strangely titled web-site, The Shady Old Lady's Guide to London.
It  was also once a great Abbey until Henry VIII got his hands on it. It was then grabbed by the Duke of Northumberland after the accession of Queen Elizabeth and his ancestors (' The Northumberlanders' ?) have kept it ever since. Well, that's my interpretation of things. I think you will find a more accurate history on the Syon Park Website. 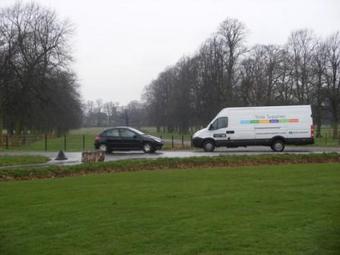 Today it has become one of our cultural treasures and can be visited either as a tourist or as an attendee at one of the many conferences that are held there.
It also explains why the Capital Ring and Thames Path are forced to come off the river and walk down a path next to the road. We can't have the riff-raff ramblers traipsing through such privileged surroundings.
You can admire the beauty of the place by looking at the official web site piccies. Here's my contribution, some light traffic - including the ubiquitous white van - that use the road as a rat-run down to Richmond Bridge.
So it's along the path and then turn left to follow the road around to the .. Thames!! - a brief burst of choral joy to celebrate. Ω

Notice how the signs are for us (in green) and the Thames Path. I don't think I would have bothered to record this section if it hadn't been for this shop that I happened to pass.

I'm sorry? What sort of tools (click here) does it hire out?

They've obviously got no shame at all in Isleworth.
Fortunately such diversions are soon behind us and we return to the banks of Thames. We now approach one of my favourite crossings on the whole of the river, Richmond Lock.  As someone who has walked the whole bloody thing, I can speak with authority on this matter. For example, I'm sure you all know about the Thames barrier, but I bet a lot of you never knew that there has been a barrier to control the tidal behaviour of the river since Victorian times and this is it. Here's a link to its history. 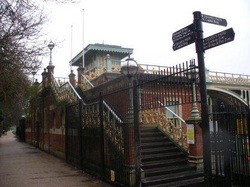 Crossing over the lock; we now take a deep breath, make sure that we have taken the necessary vaccinations, place pith-helmet on head...and enter the world south of the river. I'm sure that there are many who claim that there is no differences in London. Those of us who live on the 'civilised' - North of the Thames - side will tell you another story. Ω

Trudging down the south side of the riverbank, here's another train crossing the Thames with the Twickenham Road bridge running parallel to it.

Hey, I'm getting better at this! The pan is not juddering all over the place. Mind you I was so cold and wet by this time I might have been frozen rigid. So when I came into Richmond I had to warm up a bit, and decided to have a break at the rather wonderful Young's pub, The Waterman Arms. (The 'Beer-in-the-evening' Web link has a familiar name in the reveiw section, I noticed). I had an excellent pint of Bitter and an incredibly tasty tuna Mayonnaise roll with great chips. Bollocks to that fancy gastro-pub fare! Here's a photo from inside. 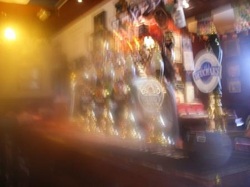 Even my camera was all wet. Mind you, it does seem to have produced a rather interesting piccie. Maybe I should pretend that I meant to capture the timelessness of the place by creating a soft-focus look. An old photo lost in the mists of time.. yea yea..bullshit..bullshit.

Interestingly, while I was drying out and replenishing my energy reserves, the rain continued to flow. Returning to the river I found that it had flooded the pathway. 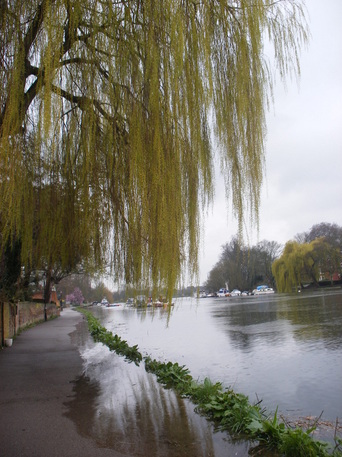 Fortunately, the riverbank was less water-logged beyond Richmond Bridge and so I was able to continue along the Thames Path; past the swanky Gaucho where you can feast on substantial - obviously expensive - Steaks and other flesh, and then on to Petersham.

The Capital ring then leaves the river and heads towards the vast acreage of Richmond Park.

Ω
It was at this point that things started to go a little awry. The little point and shoot digital camera wot I had been using, started to run out of puff. As I'd used it in movie mode, all the power had been drained from the poor lickel thing - Christ, I'll be giving it a name next - and it now refused to take any more photos. I had to resort to using the camera on me cheap and cheerful mobile phone and the results were not too inspiring.
So, basically after Petersham, I set off through the beauties of Richmond Park with no proper way of capturing my experiences. Since it was so miserable there wasn’t much to miss.  Only a few hardy dog walkers were to be found and at  'Spankers Hill' there was no one. Considering my experiences around ' Horsenden Hill' on day 2, this was most disappointing.

I didn't even spot any deer. They were probably all down at The Waterman Arms, sampling Young’s' Beer and umm..twigs and mayonnaise baguettes. Well I dunno what a deer eats.

Oh well, there are loads of beautiful shots of Richmond Park on the web. I think even I’ve got a few decent ones buried somewhere in me database. In fact I’m sure you, dear reader, have got some excellent ones too. (Here are some nice ones from another Capital Ring Web Blog, although he is going the other way).

As a result I’m now skipping on to the exit at Robin Hood’s Gate. Ω

Now it was time for one of my wrong-turns. Instead of turning left almost immediately as you enter the trees of Wimbledon Park, I marched resolutely forward. Trouble is that I only carried the Capital ring map, not a proper ordinance and survey one. Once you get off the route, it's surprisingly difficult to recover yourself. All the Capital Ring signs had vanished and I kept moving forward in the hope I would come across one just around the next tree. No luck. Dodging tracer golf balls as I pottered over various fairways I eventually came out about 2 miles from where I was supposed to be.  From here it was easier to head back to Station rather than return to the route at  Wimbledon Park Tube.Ω

When I returned home I checked on my mistake. Here it is. 'Ooops' marks the spot where I went wrong. Ф


Only way I can sum this up, is with a bedraggled rabbit. 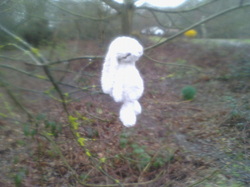 See you next Wednesday..