Welcome back. It's Friday April 1st! Wot better way to start today's journey than with a romantic ocean-going trip accompanied by the gentle chorus of Songlines. Okay, it's not exactly 'QE2' but I've always had a soft spot for the Woolwich Ferry. And it is April Fools Day. 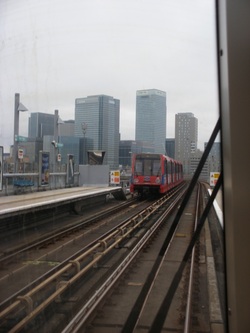 Setting off from North London this morning I decided to take the scenic route. I used the Overground from Higbury to Shadwell and then caught a DLR all the way to Woolwich. I even had time to take this striking shot of Canary Wharf as we passed it. Clouds not looking too friendly I notice.
Ironically I'll be following the DLR line for a while when I return from Woolwich. I guess it would be a lot easier to get off at Beckton and join the Capital Ring from there, but that would be defeating the object wouldn't it? So let us return to Woolwich Arsenal Station.  Ω 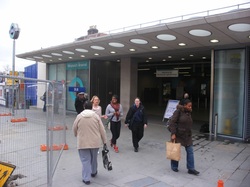 The entrance to the station was almost fenced off due to much needed repairs to the town centre. Woolwich is a pretty depressing place at the moment. By far the most vibrant part are the street stalls. Unfortunately, apart from the ubiquitous chain stores, there are an awful lot of abandoned spaces. I suppose you can blame it on the recession, but I think it is the fault of all these out-of-town complexes (remember 'Brent Cross'). Woolwich Centre is not the only gutted example of this, and I know the sad old capitalist argument that it reflects the market demands of the people, but be honest, do you really prefer generic soulless malls to vibrant local retail shops. Are you that obsessed with your cars?

Enough ranting. Let us set off for the the Tunnel... Aah. Problem.
As you can see, the tunnel is shut. So it's either throwing yourself into the Thames or getting the ferry...

There, that wasn't too painful. Once off the ferry, head west. Ω 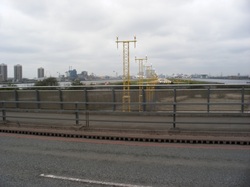 According to the map, you should be able to follow the path right along the Thames, but I have never been able to follow the river beyond the small park and through all the locks at Gallions Point ("Ahh, Har!"). This is not because of all the pirates (Ahh, Har!..oh, I've already done that joke), but various blocked off paths and fences. I suggest you take the A112 over the swing bridge. Don't forget to duck as the planes land at City Airport. I was lucky..

At the end of the road you come to a large roundabout. It's further complicated by the end of this particular branch of the DLR at Beckton. So, don't do what I did, which was to walk along the dual carriageway, but look out for a sign taking you down into one of the new estates. Ω 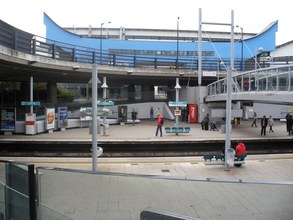 If you follow the road, you discover that when you reach the turn off for New Beckton Park, there isn't one. It means clambering over the concrete wall and scrambling down a rubbish strewn bank to the lower level.
You know, there are very few things in life that will get me flustered and those things that do come in unexpected places. I always get irritated by stupid suicidal cyclists, buses not running to schedule and getting lost on walks because I've misread the maps.
Weird thing is, for example, when I'm working and things start to go wrong, I won't run around like a headless chicken and get all flustered. I tend to shrug me shoulders and try and deal with the situation in a calm manner. I guess that's why I'm unemployed. These days you have to be SEEN to be doing something, regardless whether you are or not.  Ooops off again....
Where was I? Oh yea, slipping and sliding down the bank muttering audible obscenties to no one in particular.
Once at the bottom - do you see the fence on the higher level? That's the roundabout - you'll find Cyprus DLR with part of the East London University Campus in the background.
It's no co-incidence that the DLR terminates at Beckton. There is a distinct end-of-the-line feel to the place. When I arrived in the capital in the eighties I always remember noticing how dead this part of London had become.  The docks had been decimated by the coming of the container ports for a number of years and, as a result, they had become one huge and desolate wasteland. Since then the area has been redeveloped as cheap housing estates, and with the expansion of the DLR, is now easily accessible to the rest of London. But it still has that isolated feel to it. Check out its history here.

It does provide some interesting photo opportunities, though. I particularly like the park which has, rather incongruously, a 'trotting' track circling it. I was able to catch a horse being trained as I was walking along, so I took a couple black and white shots. Notice how it contrasts with that bloody awful building in the background that they have put alongside the runway at the old Victoria and Albert Docks - I think it is used as student accommodation, obviously no else would touch it  . Ω
They have tried hard to landscape this area and it would be nice if it developed a sense of community in this place. Catching it on a pleasant early spring day, you can live with hope. Here are some daffodils to brighten things up. 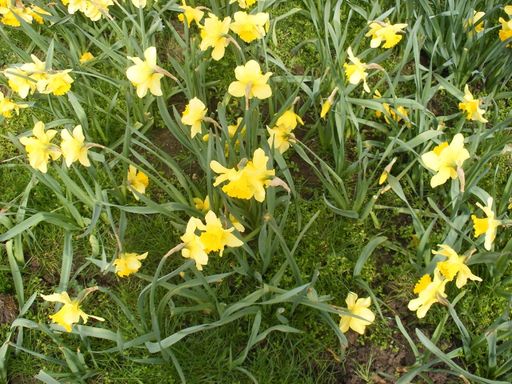 Time to walk on. Pass through the little section that has a small lake and you hit the next barrier. It's yet another escape route out of London, the A13 that takes the traffic to the M25 Dartford Crossing. Lovely. I have a piccie I took from the footbridge crossing the dual carriageway. You can click on the link if you like, but I prefer sticking with the pretty flowers.
Over the bridge we go and then it is through a few back streets to the legendary 'Shit Way'. Oops so sorry, it is actually called the 'Green Way', but my first naming is far more accurate. Here's Why.
If we were being strickly accurate this should be called the 'Northern Outfall Sewer'. I prefer my version - you would, I hear you say - but common decency prevents me from carrying on. So 'Green Way' it is. Ω

The Greenway in fact is a very impressive piece of  Victorian engineering, but I must warn you that - especially in the summer - it pongs a bit.
Before you get to Stratford there are a few interesting sites. There are some good views looking back towards central London, but my favourite has to be the magnificent Abbey Mills Pumping Stations. Never was the moniker 'Temple of Shit' more appropriate. Ω

The Greenway stretches all the way to Stratford and if you are doing the Capital Ring in the anti-clockwise direction I'm undertaking it does seem to directly lead you to the Olympic Stadium..
No... I'm not going to fall into that trap. No comments about the cost of the Olympics leaving us in the shit, or taking us down the toilet. No, I'm far too sophisticated to stoop - or should that be squat - that low. So no cynical comments okay. ..Maybe, just the one. 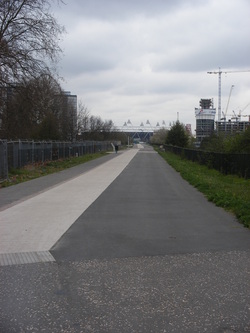 All things lead to the Olympics! Especially the smelly ones!
So now we've arrived. About a year to go and already the sense of anticipation is beginning to escalate. Yep, It's the site of the Olympics. Stratford has always been a pretty dour section of East London, the light engineering industries - a lot of them reliant on the docks - have long disappeared, so you have a lot of abandoned warehouses or empty wasteland. Not any more, since we got the Olympic vote, this area is a hive of activity.
There are loads of new flats going up - hopefully they will become 'affordable' housing after the circus has left the town, but I doubt it. For us walkers,  this means that the original Capital Ring route has a number of diversions. Here's the original route. from a map that is only a few years old. It shows how much activity there has been; the old North London line is gone - it now runs directly from Stratford Station - and all those old warehouses have been flattened and replaced by the new Olympic buildings. Here's the new route.  Alternatively, you can check this.

But I guess, I should stop being so cynical. They've also built a very sweet observation platform detailing the construction and what it will look like when it is completed. The swimming complex looks particularly impressive. I know a fellow Songliner who lives in Hackney Wick (he is trying to teach me another computer application called 'Autocad', to try and get me some work - much appreciated), and he showed me all the local parks that have been landscaped as a result of the Olympic work. So it's not all PR bullshit. Here is a nicer photo of the stadium I took last year. 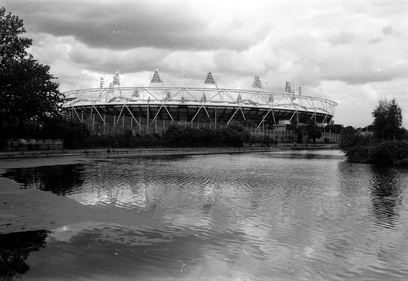 Taken in August 2008, they've cleaned out the algae you can see in the river Lea.
Nearing the end now. If you are leaving the Capital Ring here and are heading for Hackney Wick Station make sure you are on the western side of the river. Due to all the work going on, you wont be able to cross until you get to the Eastway which means doubling back on yourself. If you are like myself this will only lead to more audible obscenities. We can't have that can we?  Ω

The End is in sight.