Today I will be walking about 10 miles. I have a choir rehearsal on Mondays, so I have to rush back home.
You'll be happy to hear (sic), that you will be able to listen to some samples of these um..inspiring melodies as the journey progresses. That's assuming that I will have mastered the skills necessary to put them on the site by then. And even if I have, don't expect any covers of fucking 'Angel'.   Look! There's that cute little symbol that takes you to a street-map page that shows where we are..click and you can see where this photo was taken.  Ω 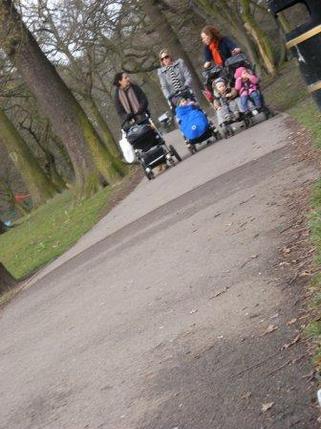 Oh look!! It's some young mothers and babies being carted around in pushchairs.

"Married? Do you have any kids?"..  there's always that slight step away, the barely discernable look of pity and condescension.

This theme I'm afraid may continue throughout this blog as I will be doing this walk. There are an awful lot of Public Parks the Capital Ring runs through. Pushchairs, Babies, chattering Mothers will all be there.

Anyway, I'm getting distracted already. This is, after all, supposed to be a record of a walk around the Capital Ring...isn't  it?

So let's move on

Coming out of Highgate woods we now pass thorough some nice residential streets - I used to drive around these bloody streets time and time again as I was learning to drive. Finally we enter the very sweet Cherry Tree Park at East Finchley.

.
I lived in East Finchley for about a year a long time ago. It was a tiny room, in a house right next to the Northern Line. It's strange the way you adapt to a situation. I quickly got used to the constant rumble of the Tube every 5 minutes. I always remember that the only thing that would wake me up would be the milkman having a heated argument with someone down the road. I guess it was pretty tough then, but I had just started a relationship with someone - I called her my little Catalan Fireball - and when you are young and in lurrve you can put up with any old crap. 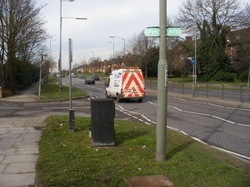 So we go under the 'Misery Line' and pass through a short passage way and arrive at the delights of Hampstead Garden Suburb. Pass through some pretty tree lined houses and here's the A1. You can tell it's a Monday morning, normally this road is chock-a-block with traffic. The next section is quite pleasant as it continues along a narrow lickel park. Unfortunately, it is always accompanied by the delightful strum of the dual-carriageway traffic which is then complemented by the approaching Norf Circular. Anyway, let us enjoy the tranquility of the park while we stick our fingers in our ears.  Ω

Actually the real Hampstead Garden Suburb starts here. Click on the Hyperlink to check out the history. I'm not sure which of the 'broad schemes' the founders would be most disappointed with. That 'weekly-wage earners' could afford to live here, or that the church-bells should not be rung to keep down the noise... 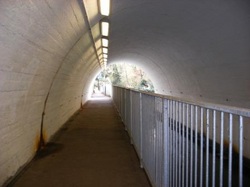 With the Norf Circular rumbling above, you pass through a delightful lickel Foot Tunnel - good job the web site doesn't come with Smelly Vision. We now come to a lovely park called "Dollis Brook". Below in the movie vignette - see I'm getting more ambitious - is a perfect example of the bloody noise of the traffic. It still amazes me that wild life manages to carry on seemingly oblivious to the racket. Near the end you can just pick out the tweet of a bird. Ω

I remember doing this part of the walk a couple of years ago, and the brook was just a pool of not very attractive algae. It looks so much nicer now. Just get rid of that disgusting dual carriageway that runs along it and every thing would be perfect.

At the end we climb up the road to Hendon Park. This is to avoid the conurbation that is Staples corner where the Norf Circular meets the Gateway to the North  - The M1. Fortunately we don't have to follow a path along the central reservation. The route takes us another way. We also miss that historical monument to consumerism; Brent Cross. If you have just clicked on the 'Brent Cross link' and spent the last half-hour perusing the items on display I want you to leave this web site immediately and I never want to see you EVER again...
Strange to think that when the guy built this place - a huge warehouse stuffed with shops miles from anywhere and surrounded by motorways - they thought he was mad. He made a fortune, of course, but personally I fucking hate the place and all the disgusting clones ('Bluewater' spings to mind) that it spawned .

Hell won't be roasting in eternal fires; it will be the Saturday before Xmas, in the Disney Store at Brent Cross....   Ω

Here are some piccies of the path between Hendon park and the Brent reservoir that is known as Welsh Harp, for some reason or other. Ah!, that is why. It's named after a pub.... And here it is..the lake, not the pub.

Actually it's quite a pleasant little water break, but make sure you don't take the wrong turning. When I did this bit I ended up walking into a dead-end field where some people were repairing their cars. Strangely, I got really angry about this - I guess it had to be a repressed sense of frustration cos I ain't got a job. Delightful enterprises such as this Web site aren't really much compensation. Oh well, let’s take deep long breath in the fresh watery air and move on.

Coming to the end of the reservoir there's our first glimpse of Wembley Stadium. For all the faffing that went on during its construction, Wembley is an impressive stadium and will dominate views throughout the North parts of the route. Time to move on and head for the country fields of Fryent Country Park. 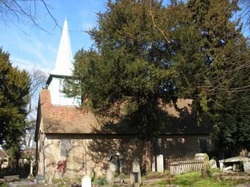 Walk up towards Kingsbury through some more residential streets and pass this sweet little church (St Andrew's) in Old Church Lane. We then come to the first of the open countryside areas on the Capital Ring. If you check out the Wikipedia link, you’ll see the park is “considered the best surviving example of Middlesex countryside in the Brent basin and has a population of the nationally rare plant the narrow-leaved bitter-cress”.  The link also has some piccies remarkably similar to the ones I took. Mind you I bet they haven’t got a gibbering, panning shot of the fields accompanied to the theme from ‘Fireball XL5’.

A quick game of chicken across the A4140 - it's more sensible to cross at the Pelican crossing  - then you climb up the hill to Barn Hill Wood. There's a little pond at the top, with a couple of nice benches and one of the best views of Wembley Stadium in London. I know you've already seen them on the Wiki link, but here are my own contributions. Ω 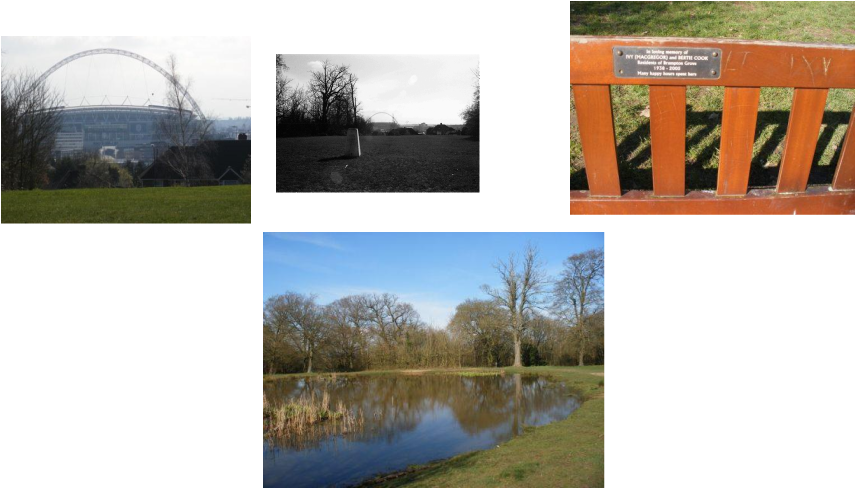 Well, that's the lot for my first day. Just walk down the hill, either to Wembley Park Tube, or do as I did, and get the one from Preston Park. By the way, it was a beautiful day on Monday. On the Wednesday, it was a different story.  To Return to the Home Page press this.. ф or if your masochistic tendencies have taken hold, then move onto day 2.